Due to personal reasons, I am taking a blog break. I do not hide I start questioning the orientation of my blog. I need to figure it out.
My Romanian speaking friends can find me here from time to time.
With love,
No comments:
Email ThisBlogThis!Share to TwitterShare to FacebookShare to Pinterest
Chapters: personal 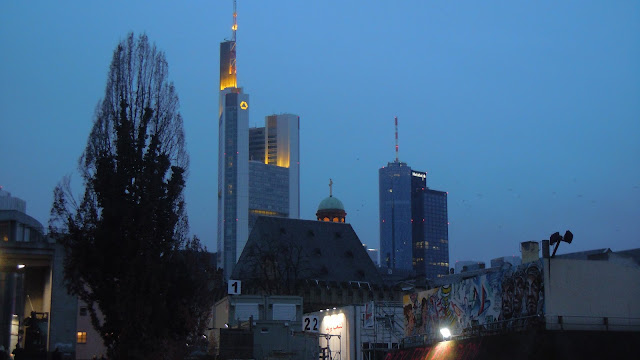 Kindle your mind,
No comments:
Email ThisBlogThis!Share to TwitterShare to FacebookShare to Pinterest
Chapters: Frankfurt, photo 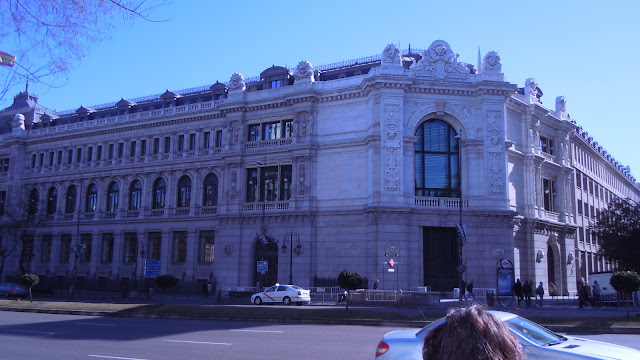 Kindle your mind,
No comments:
Email ThisBlogThis!Share to TwitterShare to FacebookShare to Pinterest
Chapters: Madrid, photo

My impressions about Madrid

I arrived home two weeks ago. It is the delay I needed to structure my thoughts and ideas. I guess I finally got them into a more or less definite shape.
First of all, if you've never been to Madrid, you should do it. Go see Madrid; you will lose if you don't. The city is splendid and, with a little effort, a week should be enough to visit a good deal of it. What places come straight to my memory : Sol, the opera, the royal palace, Parco del Retiro, the royal theater, and the museums Prado, Thyssen and Reina Sofia. By saying this, I must specify that my visit to Madrid was conceived around visiting these museums.
I liked the fact that many Spaniards practice sports. I saw many people jogging in center Madrid and many people on the sports fields. Believe me, I would like to see more of that at home. I also liked the fact that many people use bicycles and bikes. Not as many as in the Netherlands, OK, but, again, I would like to see more of that at home. And by saying this, I didn't forget that, going from west to east in Europe by car, bicycle tracks disappear when you leave the city of Szeged, at the eastern border of Hungary.
If I would have to characterize normal Spaniards in very few words, these words would be : good willing. Normal people are not always educated (superior education is paid, so not everybody can afford it), but polite, civilized and, from my point of view, they lack a certain cultural arrogance you can find sometimes in other Occidental countries. They do not lack distinction, instead. It is not a problem if you go to Madrid and people know you are Romanian; they will not treat you differently, unlike others. I like that, too.
The only problem is that very few people actually speak a foreign language (usually, English) at an acceptable level, which was very surprising for me, so you have to use the few Spanish words you get to learn within a few days. A conversation guide is welcome if you go to Spain. You can do without, but it is much more difficult. Put aside that, I saw three main groups of immigrants: South American, Eastern European (Romanian mostly) and Chinese.
The impact of the crisis is rampant. Normal people you can see in the underground, for instance, are tired, look sad and concerned, and they are not very carefully dressed. I saw more people begging in the underground in Madrid, and I mean normal Spaniards, than in the underground in Bucharest. But the biggest problem, visible if you want to see it, is that over 5 million people are jobless, an historical maximum, and most affected is the youth.
Put in perspective, I'd say things in Spain are overall clearly better than in Romania, for instance, but the economic climate seems to be worsening in 2012. Unlike the case of other countries, the economic situation in Spain was not caused by politics of a government, it was rather the pure result of conjuncture in the evolution of international markets. As a sort of conclusion, I was surprised when I saw Chinese stores in Oradea in 2010 and in Cluj Napoca last October, but it seems that I have to get used to it, as there are quite a lot of these in Spain, and they do not lack costumers. Explanation: costumers of these stores being primarily people with low incomes.

This state of affairs has an impact upon people who were not accustomed to this kind of surviving troubles. There were protests in Madrid while I visited the city, and I believe that more jobless people and lower wages can only lead to more social unrest and less optimism. Personally, I do not believe that the economic crisis will end soon (if ever, in the predictable future), but I hope things will get better little by little.
A few words about my fellow Romanians established in Spain: they are many and you can hear a lot of Romanian words in the buses or on the streets. They mostly have unqualified jobs, but this changes along with the degree of integration. The way I saw it, the older you are, the slower is the process of integration. The crisis has definitely changed their status in the Spanish society: there are people who do not like anymore to see jobs granted to foreigners and some legal measures began to be taken, so many Romanians came back to Romania, while others tried to move elsewhere and most try to resist in place, as returning home is seen as a step back. I believe this will continue in the near future, at least.
I keep my fingers crossed for Spain. I hope I'll get to see it again soon. I also hope this post will help you decide that a visit to Madrid is worthy. For it truly is.
Kindle your mind,
2 comments:
Email ThisBlogThis!Share to TwitterShare to FacebookShare to Pinterest
Chapters: Madrid, week’toriAl 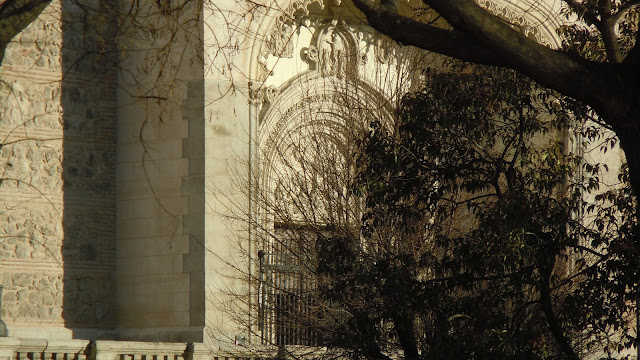 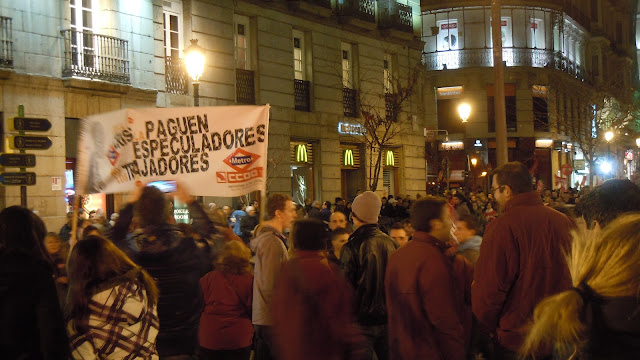 People protesting in Plaza del sol. If I understood well, it was a protest of the conductors of the underground railway of Madrid, caused by a drop of wages.
Salaries are going down in the country and normal people do suffer, so keep your fingers crossed for the people of this country, this year will be rough for many of them.
Kindle your mind,
No comments:
Email ThisBlogThis!Share to TwitterShare to FacebookShare to Pinterest
Chapters: Madrid, photo
Newer Posts Older Posts Home
Subscribe to: Posts (Atom)