I think I fell in love with someone from my job. And it is not physical attraction. It is, for the first time in quite a while, love. A feeling long since forgotten.

How cliché of me.

melum49. Poets of the Fall

Let the music speak for itself.

No comments:
Email ThisBlogThis!Share to TwitterShare to FacebookShare to Pinterest
Chapters: music


I had a 15 hours schedule today and I wanted to share something with you, guys. This is what came up. I believe these are the very first lines in Romanian since I switched this place to English.

With love,
No comments:
Email ThisBlogThis!Share to TwitterShare to FacebookShare to Pinterest
Chapters: personal, poesis

One of the few Romanian journalists that I actually admire (check out my blogroll) recently wrote an article on her blog, wondering why the Romanian intelligentsia did not have any reaction to the recent articles of some of the Western press concerning the issue of the Romanian citizenship and its granting to Moldavian citizens. The article is in Romanian and you can find it here.

And then the idea came to me. According to ZeList, there are almost 60,000 bloggers in this country. How difficult it would be, for a part of these bloggers (those capable of getting over their haughtiness, for instance), to assembly and sign an open letter addressed to the media institutions in question? It would have, at least, visibility in the virtual world. I would sign such a letter. I would even write it, if necessary.

The question to myself: how come I - considering myself a blogger and a person with an attempt of an open mind - did not think of this before? Why did I need an article written by someone else in order to think of this? Turns out I am not that mentally unaccustomed with the proverbial Romanian lack of reaction as I thought I was. Silly and lazy me.

In the end, shortly: granting of citizenship is a sovereign right of a state, even of a EU-member state like Romania. Romania did not abuse of its right of citizenship granting, while others did - if we can speak of abuse in exercising a national prerogative. Some western journalists have missed this class, it seems. Period.
No comments:
Email ThisBlogThis!Share to TwitterShare to FacebookShare to Pinterest
Chapters: Romania, week’toriAl

I hear that a 60 years old attorney from France ripped the veil out of a 26 year old Muslim woman.

I find interesting, in this case, the fact that the Muslim woman is actually a native French who chose to become Muslim. We have, after all, a conflict between two French ladies. One of them Muslim convert, the other, presumably nonreligious. Like the most of the French.

It so happens that France is a subject of interest to me. For some reasons. One of them is that my main foreign language during the school was French, and not English. I studied French for 12 years (why?....), I only studied English 2 years and 2 trimesters - just to make a comparison.

I was in love with France as a teenager and student. You know, the kind who spends a lot of time in the French Institute in Bucharest (lovely place, btw, with an enchanting sonovideotheque) and listens obstinately to the Radio France Internationale. But my admiration for France came to an end when I first visited the country in 2002. I spent almost a month in Bourgogne, and the French seemed to be so very Socialist (which is not necessarily bad) and somehow dependent upon the idea of a state. This was so much not my idea of France.

I visited the country again three years later and the first impression began to fade away. In the end, it faded partially. But then, there were the 2006 riots and - at the same time - I had to study the Franco-German relations, so my idea of France worsened again. It was at this point that I began liking Germany more than France.

There are certain things that struck me when I studied the religious situation in France. And you know, guys, my field is Sociology. What struck me was the number of French converts to Buddhism and, especially, Islam. Somehow, I understand if someone chooses to become Buddhist in France. The message of Buddhism is in my view rather congruent with the message of post-modernity.

But why would someone (and there are millions of someones in this situation), born French in a so very laique place like France, would want to turn to such a religious heritage like the Islam? These are two very opposite things, if we take a look at what France and Islam represent from a cultural point of view.

To cut a long story short, my answer to this situation is that some of the French citizens have a deficit of spirituality, and that, somehow, this deficit is indirectly caused by the law of laicite. In the end, in my view, there is a problem, a flaw, in the way French see la laicite. The law was issued in 1905, but its flaws became apparent after 1989, when the world turned its back to ideologies and went back to its cultural and religious roots. And where do these flaws lie? Simply, in the fact that the law in question does not state clearly the distinction between two different things: layman-ship and anti-religiousness. The first is neutral and socially desirable; the second, on the contrary.

I cannot finish this post without saying "hello" to my friends from Paris. If you read this, my friends, I hope we'll see each others, again, as soon as possible, in Paris.

With love,
No comments:
Email ThisBlogThis!Share to TwitterShare to FacebookShare to Pinterest
Chapters: France, religion, week’toriAl

But then, it is more understandable for a young man to show his little years, I guess, than for an old man to show he spent his life in vain, like most of us do, and to show it. I think that is why I like old men who choose not to show their age.

Although I'm only 30, I feel old sometimes - and please do not judge me, that is just how I feel - and I repeat - sometimes. I make - involuntarily - the comparison with the person I was some years ago, and I feel old. Forgive me for that; our society says that old age comes after 60, but I think there are many of us who get to be old before that age mark. And sometimes I am one of them, because I fell powerless, helpless, and tired. Very tired.

I am happy when someone tells me he/she would've never thought I'm 30, and not even 25, because I am a person who does not show its age. Like it happened yesterday.

Even if that person used to think of me as of a child.

No comments:
Email ThisBlogThis!Share to TwitterShare to FacebookShare to Pinterest
Chapters: personal

I spent my last Saturday night (a part of it) attending a rock concert. I went alone, as the people I invited during the week to join me could not come. It did not matter much in the end. 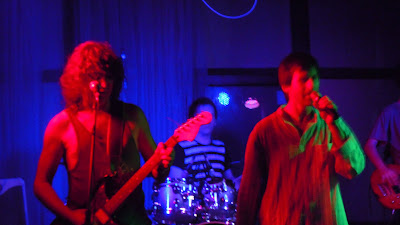 It was a concert of the band Sarmalele Reci. Trying - for my English speakers - to explain the name of the band, I'll say that sarmale are a Romanian dish made out of pork meat and rice folded in cabbage leaf. If eaten cold (sarmale reci), they are not very good for the stomach, they are heavy. The name of the band thus suggests a social message: hard and uncomfortable truths (about the Romanian post-communist reality, in general) that must be told, just like you must sometimes eat cold sarmale. 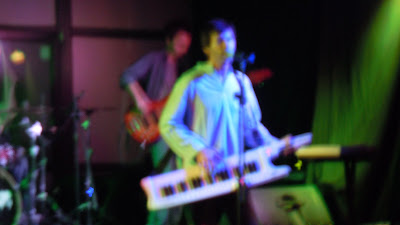 I listened to the band mostly as a teenager, from 1998 to 2002. I consider it to be the best period of the band, by the way. As for the musical style of the band, I would say it is: mostly rock, than pop and than a touch of jazz. Sometimes, oriental themes can be distinguished within some of the songs (Răpirea din serai), and occasionally even medieval influences (Omul cu mii de nume). It is one of the best Romanian rock bands, but unfortunately it is not as visible as it rightly could be. 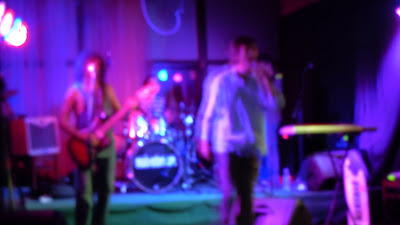 For some reason, after 2003 the activity of the band lost intensity, but the band never ceased to exist. So I considered their concert last Saturday an opportunity to do something I wanted to do a long time ago: attending one of their live concerts.

I must say I was not disappointed. 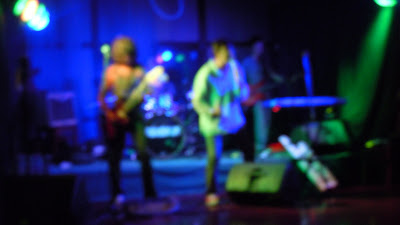 A short - and rather technical - explanation about the photos (they are not very clear): I did not have the inspiration of bringing the tripod with me and it was really difficult to take proper photographs while literally dancing in my chair. 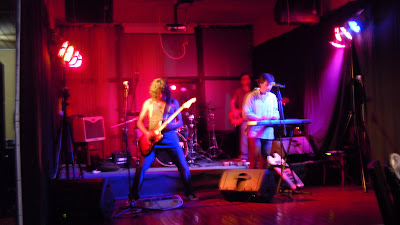 In the end, I post here what I consider to be their best song so far.

Do not worry, my friends, I am still around and ain't going nowhere.

I started working again full-time (and even some over time) this week, and my free hours were rather limited in number, unlike before.

I'll be back within the next few days.
No comments:
Email ThisBlogThis!Share to TwitterShare to FacebookShare to Pinterest

melum47. all through the years

Nostalgia.
1994 is a looooooooong way back.


Longing to sail on
Through the night to the stars
On until sunrise
Where the moon hides her tears
All through the years.

No comments:
Email ThisBlogThis!Share to TwitterShare to FacebookShare to Pinterest
Chapters: music

Guys, it is time for some action.

As those of you living in Romania may know, the eastern part of the country is literally under water for quite a few days now. There are some big floods and the authorities are (unsurprisingly) overwhelmed by the situation. There are, then, also, lots of people in distress. More than 20 died so far.

One of the bloggers from Hotnews, Dan Popa, came with a very generous idea: let's help the children (and the adults, if possible) from Moldova affected by the floods. If not with money, then with clothes and toys, even food. If we have some spare stuff, I guess we can share them. There are people who really need them. Even more so, taking into consideration the fact that people are not only fighting with floods, but also with the crisis.

If any of you is interested about this and want to help, please go to Dan Popa's blog and post your offers.

This is not only a post, this is an appeal. Please make it as wide as possible around you. We are crossing times of need. Any gesture can help.

In the words of Peter Gabriel:

When the flood calls
You have no home, you have no walls
In the thunder crash
You're a thousand minds, within a flash
Don't be afraid to cry at what you see
The actors gone, there's only you and me [...]