The corrupt mayor of Ramnicu Valcea - member of the Democrat-Liberal Party - has been condemned a few days ago to three and a half years in jail for corruption.

The president of the Social-Democrat Party and his wife are investigated by the National Agency for Integrity in a case of forgery.

Meanwhile, the monumental house (located on Zambaccian Str.) belonging to the contender to the presidency of the above mentioned political party has been seized (for the third time, indeed), by the prosecutors, in a case of corruption.


All that in three days only? Gosh, that is nice... but in Romania miracles last only three days.
No comments:
Email ThisBlogThis!Share to TwitterShare to FacebookShare to Pinterest
Chapters: week’toriAl

a glimpse of rebranding - blogging8

Well, this is it.
I changed the title of the blog. From now on, it will not carry anymore my pseudonym, but its own title. And this change means also that the focus will modify, a little bit, as well.

In short, I want to explore - for a while - my relationship with Bucharest. As you (may) know, I was not born here and the image of this city is rather negative in that part of the country where I grew up. Partly for that, partly because of going away from home, when I came here for good, 15 years ago, I was scared and defensive. Maybe for that reason, it took me a good deal of time to fit in.

Slowly, we - the city and I - got closer and closer. I got to know new parts of the city, new situations, all adding to what I already knew when spending my holidays at my grandparents`. It took me 15 years lived here to accept my double identity, and I can say now that I care for this place as much as I care for the place where I was born.

You cannot consider Bucharest an 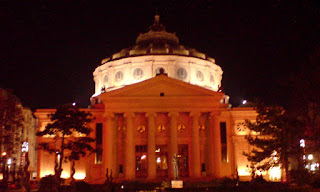 ugly place after getting to know it. Bucharest is just a city with a great deal of bad luck, if I may say so. A great deal of bad luck, yes. The ugliness we can see each day here is less the ugliness of the city itself than the ugliness of those who are supposed to run the place -and maybe the carelessness of some who live in it. I know a dictator and two (post-revolutionary) mairs of the city who were not born here and made decisions that greatly impacted the city. And now, it is about to lose its soul.


PS. I had the occasion to see a while ago the house situated at Aviatorilor 92. It was a jewel. A recently demolished jewel - now, a 4 level glass faceted building will take its place.
2 comments:
Email ThisBlogThis!Share to TwitterShare to FacebookShare to Pinterest
Chapters: blogging

The song is just nice (and a little repetitive), but the idea of the video is quite fabulous. Funny, it doesn't make me think of the - presumably - last days of my life, but rather about my childhood.

Do you ever think how getting old will be for you? Ever?...

Everybody went to see Avatar in Bucharest.

I'm exaggerating, of course, but the truth is many people went to see it, and so did I. And many speak and debate about it - Romanian blogs are full of it.

It so happened that last week I received an invitation to see the movie, from some very good friends, and I said to myself I should do it. So we went, on Wednesday evening, to one of the many multiplexes in town. I was actually stunned to see how many people actually DO go to cinema in Bucharest (statistics say the opposite) - truth be told, the last time I went to cinema was in 2008. And by the way - it is for the very first time yours truly ever saw a movie on 3D.

As for the story, half through the movie I realized it reminded me of Atlantis - the lost empire. With the difference that I actually like Michael J. Fox more than Sam Worthington, as far as acting skills are concerned. But still, go see it - Avatar might be the best movie made in 2009.
1 comment:
Email ThisBlogThis!Share to TwitterShare to FacebookShare to Pinterest
Chapters: cinema

I'm not in the best mood and do not ask me why, because I am unable to explain it. When that happens, it is usually a complex of factors. Perhaps a part of it can be explained through the very serious health problems my sister is experiencing recently, as she badly broke her leg and spent Christmas in hospital. But definitely not only it. Perhaps the most important thing, still, is that I see how most of the people around me forgot to live and are only doing some surviving, which is very sad. I know our immediate perspectives are bad, so I cannot judge. But I do feel it is sad.

On a different note, I think I already have a schedule for August 14th. Haggard shall sustain a 2 hrs concert in Bistriţa - believe it or not - as a part of the Medieval Festival of Bistriţa. I had to check it out before believing it myself. And tickets are only 50 RON. If I won't be abroad by then (which is possible - I got an invitation for a holiday in Turkey at that time), I guess home will be the place to be for me at that point. Anyway, I'll buy the ticket just in case.

Well, I have to hurry a bit, because I want to get to the gym in a few minutes (btw, did I tell you I do fitness recently :) ?). I invite you to listen to a beautiful song from 1995:

Have a very nice week-end. And see you around.
5 comments:
Email ThisBlogThis!Share to TwitterShare to FacebookShare to Pinterest
Chapters: personal
Newer Posts Older Posts Home
Subscribe to: Posts (Atom)