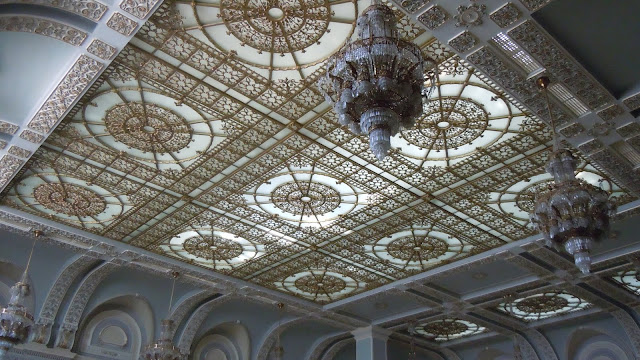 This is the ceiling of one of the hundreds of halls of the Parliament Palace.
I got the occasion to take another visit to this building a few months ago, being invited by one of my friends. We talked, among other things, about the kind of politicians who populate this palace and about their determination to fight the crisis. You know, the Parliament's Palace is the home of the two chambers of the Romanian Parliament (among other institutions). He told me something I already knew: the Romanian members of the Parliament and the Romanian political parties have absolutely no idea what to do; our anti-crisis plan is the agreement concluded with the IMF.
Honestly, to be a little malicious, when you spend your time in places like the most expensive hotels of Bucharest and the second largest (and one of the most luxurious) buildings in the world (and our Parliament  fellows do just that), it's rather hard to think about the problems of the country you are supposed to represent.
Email ThisBlogThis!Share to TwitterShare to FacebookShare to Pinterest
Chapters: Bucharest, photo

Oh wow, this is absolutely magnificent!

I can relate to your posts about the dog in the post office and the car blocking everyone else — happens quite a lot in Manila too, unfortunately.

Welcome to the CDP community! Looking forward to seeing Bucharest through your eyes.

thank you for your comment. And for your visit.

Indeed, the Parliament Palace is a magnificent place, and I have the impression that tourists coming here usually have it on the top of their "to see" list. The hall I photographed is not, however, part of the visiting itinerary in the palace. Only those who work there can see it.

I hope both Bucharest and Manila will get rid of these problems, sometimes. In the case of Bucharest, it won't be soon.

Thank you for your welcome. Hope you'll like what you see here.

You are always welcome on my blog.